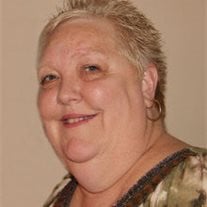 Tena Marie Duensing, age 55 of Higginsville, Missouri died on Wednesday, July 24, 2013, at St. Luke's Hospital in Kansas City, Missouri. Born Tuesday, September 10, 1957 in Clinton, Missouri, she was the daughter of Robert Gibler and Mabel (Parker) Gibler who both preceded her in death. Tena worked as a paraprofessional at Lafayette C-1 Elementary School retiring in 2008. Tena received her real estate license in 1998 and worked at Home Realty in Higginsville for several years. She was president of the Class of 1976 of Odessa High School where she graduated and she also received an Associate's degree in Court Reporting. She was a member of Mayview Baptist Church and lived the past 30 years in Higginsville, Missouri. Surviving are daughter, Lindsey (Kinley) Winfrey; brother, Bobby (Debbie) Gibler; and sister, Peggy (Tom) Clemmons all of Higginsville. A Memorial Service will be held at 10:30 a.m. Saturday, July 27, 2013 at Grace United Methodist Church, 16 W. 15th St., Higginsville with Pastor Emily Carroll officiating. Inurnment will be at a later date at the Higginsville City Cemetery. The family will receive friends from 9:00 A.M. to 10:30 A.M. on Saturday prior to the service at the church. Contributions may be made to the Shriner's Hospital or American Diabetes Association . Honorary pallbearers are Kinley Winfrey, Tom Clemmons, Bobby Gibler, Donnie Gibler, Jarrod Gibler, Michael Clemmons, Clint Vanatta, and Roger Vanatta. Online condolences may be made to the family at www.hoeferfuneralhome.com

The family of Tena Marie Duensing created this Life Tributes page to make it easy to share your memories.

Send flowers to the Duensing family.