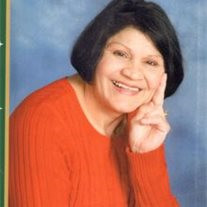 Tomasa " Tomie" Kelso, age 69 of Higginsville, Missouri died on Sunday, January 6, 2013, at her home. Born Sunday, August 8, 1943 in Indio, California , she was the daughter of the late Ponciano Lopez Torres and the late Maria Louisa (Parr)... View Obituary & Service Information

The family of Tomasa "Tomie" Kelso created this Life Tributes page to make it easy to share your memories.

Send flowers to the Kelso family.