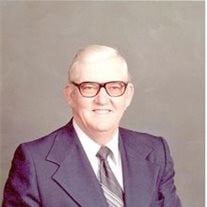 Walter W. Luehrman, age 84, of Higginsville, Missouri died on Thursday, October 14, 2010, at his home. Born Saturday, January 16, 1926 on a farm northeast of Lexington, Missouri, he was the son of the late Walter August Luehrman and the late Annette Louise Hackmann Luehrman. His family moved to the "Webb" farm northeast of Higginsville in the spring of 1940. After attending the Lexington High School his freshman year, he attended the Higginsville High School where graduated in 1943. He married Pearl Morlock April 6, 1952 in Versailles, Missouri. After high school, Walter continued to farm the home farm and additional land he had purchased until he retired in 1991. He received the first Outstanding Young Farmer award given by the Higginsville Jaycees in 1957. Besides farming, Walter was very active in community activities. He served on the former Corder R-3 School Board, Lafayette Co. ASCS Committee, Lafayette Co. Farmers Home Administration Board, and served 12 years on the State Board of MFA, Inc., Columbia, Missouri; 35 years as a delegate from the Higginsville MFA Oil Co. bulk plant. In 1978, Walter was one of the original organizers of the Higginsville State Bank, which received its charter in 1978. He served on its board & served as Chairman for 15 years until the bank was purchased by Central Banshares, Jefferson City, Missouri in 1998, and is now known as First Central Bank. Walter served on the George J. & Hilda Meyer Foundation Board, serving during the time when the John Knox Village East Retirement Center was added in 1975, and continues to serve on its Board of Directors. He has been an active member of the Higginsville Chamber of Commerce for many years, serving on its Agriculture Committee, as well as the Membership Committee. Walter has been an active member of the Higginsville Rotary Club for over 25 years and last year, he and his wife, Pearl, established a Luehrman-Rotary Scholarship, which is awarded to a C-1 High School graduate each year, selected by the Rotary Club Scholarship committee. Walter has been an active member of Salem United Church of Christ where he has served on the Church Council, Board of Elders, and has sung in the Adult Choir for nearly 70 years. Surviving are his wife, Pearl, of the home; daughters, Janette Louise (Dean) Fuller of Willis, Texas; Karen Juliet Luehrman of High Ridge, Missouri & Lois Marie Crane of Kansas City, Missouri; sister, Dorothy Nieman of Higginsville; three grand children, Cynthia Louise (Scott) Thomas; Lindsey Marie Crane & Kyle Christopher Crane; great granddaughter, Kaley Thomas. Preceded in death are Walter's parents & a sister, Katherine Busch Dryer. The family will receive friends after 6:00 P.M. to on Saturday, at Hoefer Funeral Home, 1600 Main St., Higginsville. A Funeral Service will be at 2:00 P.M. on Sunday, October 17, 2010 at Salem United Church of Christ located at 1500 Main St. Higginsville, with the Rev. Joyce Holley officiating, Doris Jane Stoner as organist, Salem Choir & Karen Luehrman as vocalists. Interment will be in Salem Cemetery, Higginsville. Memorial contributions may be sent to Luehrman-Rotary Scholarship Fund or Salem Endowment Fund. Pallbearers include Don Nieman, Wendell Busch, Doug Kempfe, Gary Riekhof, David Salyer & Kyle Crane. Honorary Pallbearers are Kenneth Ritter, Bob Sander, Jack Rhodes, Bob Jarman, Paul Warren, & John Knox Village Board Members. . Online condolences may be made to the family at www.hoeferfuneralhome.com

Walter W. Luehrman, age 84, of Higginsville, Missouri died on Thursday, October 14, 2010, at his home. Born Saturday, January 16, 1926 on a farm northeast of Lexington, Missouri, he was the son of the late Walter August Luehrman and the late... View Obituary & Service Information

The family of Walter W. Luehrman created this Life Tributes page to make it easy to share your memories.

Send flowers to the Luehrman family.