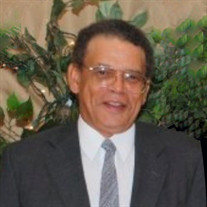 Leonard Wayne Seals, 75, transitioned to eternal life on Sunday, May 16, 2021. Wayne, as he was affectionately called by family and friends, was born on January 6, 1946, in Higginsville, Missouri. He was the tenth child of ten children born to Emanuel Francis and Johnnie Nadine Seals. Wayne spent his childhood years in Higginsville, where he attended St. James A.M.E. Church and loved to participate in church plays. He used to follow his older brothers and sister to the Douglass School, and he was so cute and well-mannered that the teachers let him stay. He spent much of his early childhood years in Blackburn, MO, with his beloved "Uncle Buddy", who taught him much of what he knew about cars and other automobiles. Wayne has passed that love of cars to his grandson, Marcus Smith. He was educated in the Higginsville public school system. Shortly after his high school graduation, he enlisted in the U.S. Marine Corps (1963-1969). He was very proud of the high security level he attained during his tenure at the Pentagon. He dedicated his life to public service and in addition to the U.S. Marine Corps, he served as a U.S. Marshal; worked at the U.S. Postal Service; and subsequently moved from Kansas City, MO to Chicago where he joined the Chicago Police Department. He worked many years with the K-9 unit, spent time as a plainclothesman, and worked with the Vice-Squad before retiring in 1996. In retirement, Wayne resided primarily in Blackburn. He lived in a home that had been owned by his paternal great-aunt. He was an avid gardener and sportsman. He was handy with tools and refurbished and maintained "Uncle Buddy's" home in Blackburn. He loved to ride his custom-built Harley-Davidson motorcycle and belonged to The Zodiac Motorcycle Club in Higginsville. He was very proud of the many civic and community activities of the club. He also loved to entertain family and friends. When you visited Wayne, you could be sure to have enjoyed a BBQ dinner or fish fry, and you would not leave Blackburn without vegetables from his garden and fruit from his trees. In Blackburn, Wayne was Treasurer of the local American Legion. He sometimes officiated at the weekly Bingo games. In Higginsville, he was a member of the Juneteenth Committee and participated in the upkeep and maintenance of the Mt. Muncie Cemetery. In his later years, he lived in the family home in Higginsville until his death. Wayne was preceded in death by his parents and six siblings, Emanuel Clinton, Robert Kedrick, Rebecca Jane, Howard Eugene, William Harold and Claudette. He is survived by two brothers, John Bradford and George Edward; and one sister, Sandra LouAnn (Clifton) - They are already missing the "little brother". He is also survived by five children; Kenneth (Donna), Carmen (Charles), Kimberley, Sterling (Melanie), and Nicole (Joe); thirteen grandchildren, twelve great-grandchildren, and his caretaker and niece, Joni Nadine Seals. Four to Five generations of nephews, nieces and cousins are left to cherish the memories of "Uncle Wayne" and miss his support, encouragement and mentorship. The family will receive friends from 11:00 AM to 12:30 PM, Wednesday, May 26, 2021 at Salem United Church of Christ in Higginsville. A funeral service will follow at 12:30 PM with Bishop William Thompson officiating. Burial will be held in the Missouri Veterans Cemetery with full military honors. Memorials may be made out to the Blackburn, MO American Legion. Casket bearers: The Zodiac Motorcycle Club. Honorary casket bearers: Michael Drawhorn, Roger Lewis, Jordan Seals, David Seigfried, Marcus Smith, Marcus Underwood.

Leonard Wayne Seals, 75, transitioned to eternal life on Sunday, May 16, 2021. Wayne, as he was affectionately called by family and friends, was born on January 6, 1946, in Higginsville, Missouri. He was the tenth child of ten children born... View Obituary & Service Information

The family of Wayne Seals created this Life Tributes page to make it easy to share your memories.

Send flowers to the Seals family.