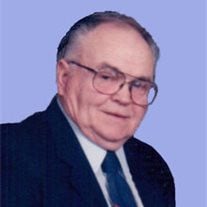 William Junior Brooks, age 80 of Corder, Missouri died on Monday, February 6, 2012, at Lafayette Regional Health Center in Lexington, Missouri. Born Sunday, October 18, 1931 in Corder, Missouri, he was the son of the late William Albert Brooks, Jr. and the late Gladys Veva (Coleman) Brooks. He was married to Doris J. Ray on June 10, 1955. He served as a Boatswains Mate 3rd Class in the U.S. Navy from 1950 until 1954. He was a Veteran of Korea. Mr. Brooks worked as a barber at Higginsville Habilitation Center until his retirement in 1997. He also worked at Service Barber Shop in Higginsville as well as having his own barber shop in Corder, retiring in 2002. He lived most of his life in Corder. He was a member of First Presbyterian Church in Corder and was a former deacon and elder of the Church. He was a charter and lifetime member of the Corder V.F.W. Post #4288, a member of the Higginsville American Legion Post #223; former City of Corder Alderman and volunteer fireman of Corder. He graduated from Moler Beauty College and Moler Barber College. Surviving are his wife, Doris, of the home; one son, Willie Brooks of Higginsville, Missouri; one daughter, Michele Hendrix of Corder, Missouri; two brothers, Clifton (Mary Kay) Brooks of Pittsburg, Missouri; Danny (Sandy) Brooks of Corder, Missouri; two sisters, Nancy Anderson of Corder, Missouri; Kathy Hill of Higginsville, Missouri; 5 grand children and 3 great grand sons. Preceded in death are one daughter, Dorischele Brooks, two brothers, Albert and Gary Brooks; and one sister, Wanda Brooks. A Funeral service will be at 10:30 A.M. on Thursday, February 9, 2012 at Hoefer Funeral Home Chapel, 1600 Main St. Higginsville with Rev. Matt Limback officiating, Interment will be in Calvary Cemetery, Corder. The family will receive friends from 7:00 P.M. to 8:00 P.M. on Wednesday, February 8, 2012, at Hoefer Funeral Home, in Higginsville. Memorial contributions may be sent to Corder VFW Post # 4288,Corder Presbyterian Church.or Corder Calvary Cemetery Association, Casketbearers are Vincent Sanders, Scotty McCoy, Dustin White, Drake Hendrix, Allen Hendrix, and Gabriel McCoy. Honorary Pallbearers are Isaac McCoy and Dustin White, Jr. Online condolences may be made to the family at www.hoeferfuneralhome.com

The family of Wm. Junior Brooks created this Life Tributes page to make it easy to share your memories.

Send flowers to the Brooks family.